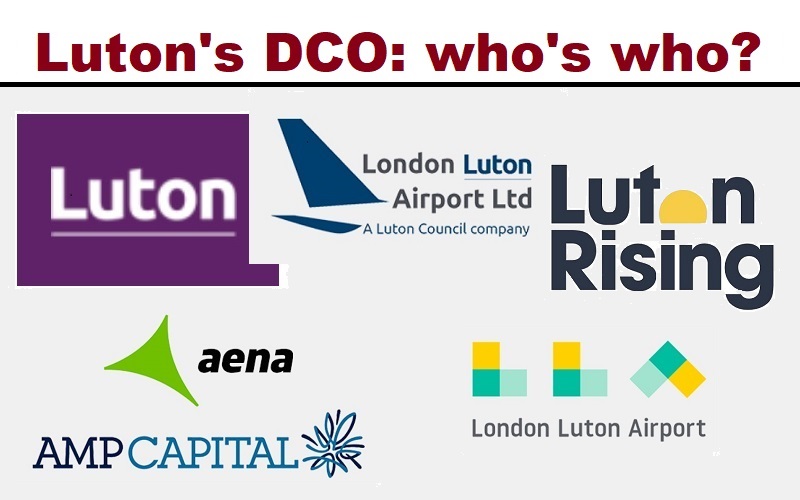 The Development Consent Order application for another major expansion of Luton Airport is being fronted by it owner, rebranded recently as “Luton Rising” but known to many locally as LLAL, Luton Council’s airport owning company.

Despite the current expansion programme still having 6 years to run, and failing to deliver its noise reductions, LLAL has reportedly sunk over £65 million of public money into this further massive expansion scheme. Many argue the money should have been spent to diversify the local economy – Luton Airport is spectacularly badly sited for major additional expansion (see Is Luton Airport a good investment).

Luton Borough Council owns the physical assets of Luton Airport and derives money from it. The 1986 Airports Act required Councils to divest themselves of direct airport ownership, so…

London Luton Airport Ltd (LLAL) was set up as a private company 100%-owned by the Council, to own the Airport infrastructure on its behalf. Robin Porter is Chief Operations Officer for LLAL and Chief Executive of the Council. LLAL and the Council are intimately linked, and recently…

Luton Rising has been adopted as the new trading name for LLAL. This rebranding is apparently designed to present greener credentials. But the same people are involved, and being a private company LLAL can make making decisions concerning hundreds of millions of pounds of public money with no public accountability. Luton Rising receives the concession fee for operation of the Airport from…

London Luton Airport Operations Ltd which took over the operation in 1998, paying a fee based on passenger numbers and cargo volumes. In 2014 LLAL and the Council set up a scheme to incentivise the operator to achieve rapid growth, leading to breaches of noise conditions in what Hertfordshire County Council has called “mismanagement” of the airport. LLAOL is not owned in the UK – its shareholders are:

Aena (51%) and AMP Capital (49%). Aena is a state-owned Spanish company which operates airports and claims to have a commitment to sustainability. AMP Capital is a global investment manager with a large presence in Australia.

The Council and LLAL are in a very difficult financial state as a result of the pandemic. Yet more questions are being asked than are answered. For example:

If £280m has been spent on the DART monorail, with more to come if it is extended, what is the business case? What is the expected life of the moving parts and carriages? What are the maintenance costs? Will it deliver sufficient cash-flow to cover interest on borrowings and debt repayment?

What is the capital budget for the second terminal, extra stands and car parks and who will pay for it? Will the airport operator pay more as the infrastructure of the airport is increased? Will a new concessionnaire be asked to (and prepared to) make an upfront buy-in payment?

Why has the valuation assigned to the airport in the yet-to-be-approved accounts suddenly been increased? How is the Council intending to reduce its financial exposure to the airport? Is LLAL a sound enough company to continue making the huge interest payments on loans from the Council?