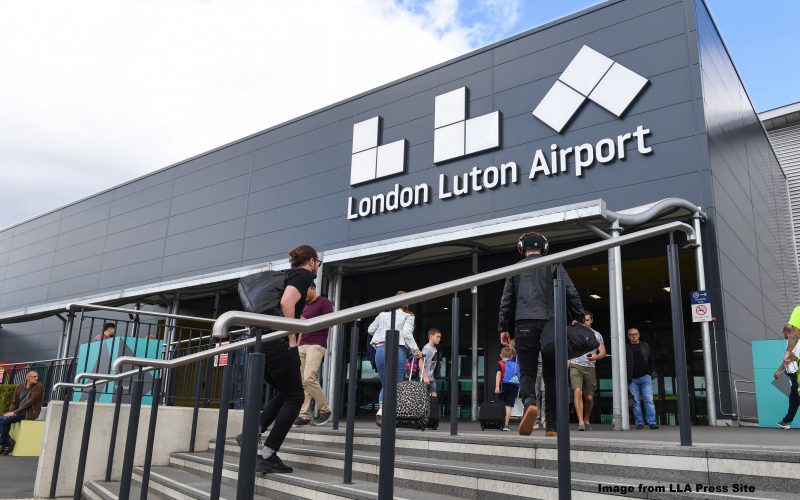 Location, Location, Location…
..the mantra of every Estate Agent – and rightly so. So how does Luton Airport stack up? Well, bizarrely it’s been built on a hill right next to a densely populated town. Not the normal flat location with plenty of uninhabited land close by, as one might expect for example in sensible Europe. The old wartime airstrip was used for flight training until it was spotted by the package holiday industry – no doubt looking for a cheap location to fly from, and the rest is history.

What’s wrong with an airport being built on top of a hill? Well, because it makes it very difficult for a conventional railway line to access the site. Luton Airport Parkway station is at the bottom of the hill, from where passengers have to transfer to and from buses – though there is a part-built monorail whose cost has not helped the parlous state of Luton Borough Council’s finances. If public transport access is inconvenient – which indeed it is for anyone not living close to a Thameslink station – then people come by car or taxi instead, and traffic pollution is one of the most significant air quality issues in Luton.

And if you fly planes from high ground situated next to large communities, they are not shielded by the terrain from the loudest phases of each flight – takeoff and landing – and hence the Airport annoys lots more people than if it was located well away from any communities. One would expect this of a modern airfield planned with sustainability in mind. As a result, there is an extensive and well-organised set of campaign groups representing people all around the airfield, determined to halt further expansion at Luton Airport.

Small may be beautiful – but it’s constraining
Luton Airport occupies a small site, with a park to the north, a deep valley to the south, a ravine to the west and a County boundary to the east. Hmm – not ideal for expansion. Even the over-ambitious plans drawn up by the Airport owning company LLAL struggled to make any sense of this.

The best they could come up with was to propose to seize the park, which is located on an old landfill site (which reports indicate contains toxic waste), spreading the landfill out in order to act as a flat base for a second terminal. New taxiway and stand capacity would require a massive earth-moving operation due to the contours of the airfield. It all sounds very expensive – indeed their draft project was initially budgeted at £2.4bn, which probably means a final cost of £3bn at least.

Pound-for-pound, compared to the previous expansion at Luton Airport which cost around £18 per additional passenger to add 9 million passengers per annum, the proposed LLAL expansion project with its £2.4bn price tag would cost an eye-watering £170 per extra passenger to increase from 18 to 32 million passengers. Is that a good investment for some third party as a major infrastructure project?

Length matters
The length of an airport runway defines the maximum size of commercial aircraft which can use it. And Luton’s runway – squeezed in just before it ends in a precipitous drop – is a mere 2160 metres long, compared for example to Gatwick’s 3136m, or Manchester’s and Stansted both at 3048m.

From the point of view of local communities, this limits the noisiness of the aircraft using the site – and is the real reason why the noise limits are lower than at other airfields, unlike the myth put about by the airport operator that they are somehow saintly in adhering to some of the strictest noise conditions of any UK airport. The proof of that pudding is in the eating: when faced with the choice of abiding by its noise footprint planning limit – which it forecast in 2016 to be under threat – or driving straight through it, the airport operator chose to carry on expanding and break the limit. This was when Nick Barton was the MD – hopefully Alberto Martin the current CEO has a more socially responsible attitude? We’ll see…

Riding roughshod over Planning Conditions can come back to bite you
When Luton Borough Council granted permission in 2013 for a 15-year programme of development and mitigation to enable Luton Airport capacity to be expanded from 9 to 18 million passengers per annum, Planning Conditions were agreed with the airport operator LLAOL to keep noise within clear constraints. The operator undertook to introduce aircraft with quieter engines so that the increase in flights over the 15-year expansion project would be offset by a reduction in the noisiness of those flights.

Had LLAOL kept its word, expansion may have occurred without creating a firestorm of protest. As it is, they agreed to take financial incentives from the Council (ie the local planning authority – a clear conflict of interest) to grow more rapidly, and a blind eye was turned by both parties when the over-rapid growth, before the fleet had been modernised, breached the planning limits on the overall noise footprint.

The airport operator then ran bleating to the Borough Council asking for permission to have the noise condition set aside, in return for a bit more noise insulation which would take decades to deliver. A very strong protest from LADACAN members and people living all around the airport, as well as other Local Authorities and Herts County Council has resulted, and can be found on the Luton Planning Portal under reference 19/00428/EIA. With the assistance of local MPs, the Secretary of State has ruled that he will review any decision made by Luton Borough Council on this matter.

In the meantime, any trust relationship with local communities has been destroyed. For more detail on this disgraceful episode, see Luton Airport’s Planning Condition betrayal

A rock and a hard place
Luton Airport has already breached one planning condition, as described above, and before the Covid-19 lockdown was on the brink of breaching another – in both cases due to commercial greed. Now the airport operator is faced with the difficult task of extricating itself from possible enforcement action. Its planning condition 8 states quite clearly:

At no time shall the commercial passenger throughput of the airport exceed 18 million passengers in any twelve month period. From the date of this permission the applicant shall every quarter report in writing to the Local Planning Authority the moving annual total numbers of passengers through the airport (arrivals plus departures). The report shall be made no later than 28 days after the end of each quarter to which the data relates.

Reason: To enable the Local Planning Authority to exercise proper control over the development, in the interests of securing a satisfactory operation of the development and to safeguard the amenities of the surrounding area. To accord with the objectives of Policy LP1 of the Luton Local Plan and the National Planning Policy Framework.

As a result of over-rapid growth, the airport operator has seriously embarrassed itself in front of airlines by letting too many slots in the dash for cash, and is now finding it very hard to row back from the breach not only of the noise footprint condition 10 but also the overall passenger limit condition 8, not due to be reached until 2028. And its attempt to satisfy a Condition to set out a strategy to reduce its noise footprint by 2028 has resulted in the issuing of the most aspirational moonshine we have ever encountered – but that’s another story…