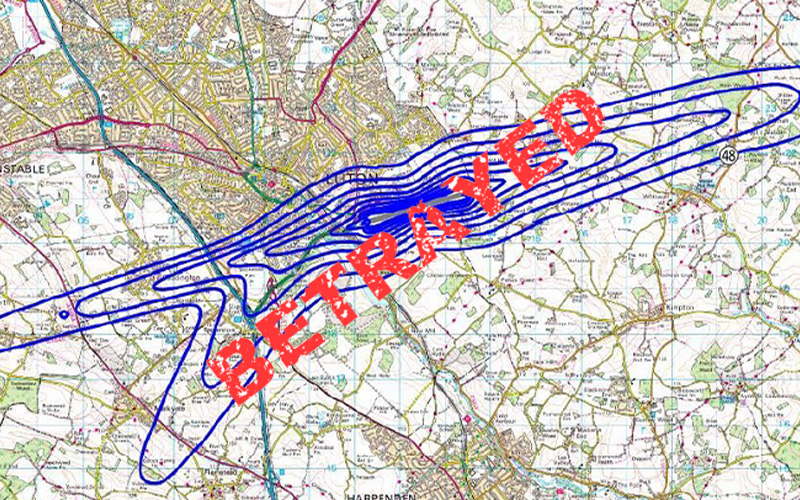 Luton Airport breached its noise control planning limits in 2017, 2018 and 2019. This was not unexpected – it predicted it would do so in 2016. But the Spanish-owned London Luton Airport Operations Ltd failed to take any effective action to prevent the breach – even though it had signed a legal Section 106 Agreement with Luton Council which obliged it to conduct the operation of the Airport in accordance with the noise control conditions.

We believe the breach occurred as a result of pressure by the Council and its Airport-owning company LLAL for faster growth. In 2014, Airport owners LLAL set up a financial incentivisation scheme to stimulate rapid growth at Luton Airport (see p16 of the London Luton Airport Ltd 2016 annual accounts). Yet the Council has a responsibility to ensure the planning conditions are respected – its Director of Planning is obliged to monitor the terms of the Section 106 Agreement.

This failure of scrutiny and failure of proper management led to far more noise than was permitted over the towns and villages all around the Airport. Passenger numbers grew at an unprecedented rate, doubling in just 7 years, numbers of flights up 40% overall, and yet with no balancing mitigations since the growth was unleashed ahead of quieter aircraft in an apparent “dash for cash”.

Departures from Luton are still held low for up to 16 miles because of failure by the industry to modernise airspace: Luton flights are held low due to overflights from other London airports. Noise impact has increased year-on-year since 2013 because expansion has rushed, well ahead of fleet modernisation. Night flights have doubled from 8,000 to 16,000 in 5 years.

As a result, the night noise contour planning condition has been breached since 2017, the airport operator LLAOL is trying to have the existing planning condition set aside, and Luton Borough Council has failed to take any enforcement action.

It is ordinary people, being kept awake in communities all around the airport who suffer the consequences of what has been described as “reckless greed”.

In its response to the application by the Airport the have the legally-agreed planning condition set aside so that it could continue to profit at the expense of local residents, Hertfordshire County Council said in July 2019 (our emphasis):

“The ‘contract’ between the Partnership in this case (the Airport operator, the local planning authority, highways authorities, communities and others) entered into for growth of the Airport to 18 million passengers per annum and the setting of noise caps to provide certainty for communities is in large part the terms of the planning permission. In failing to manage its operations to comply with that consent and committing to comply with it in the future, the Airport has betrayed the other partners, particularly those communities currently suffering from the adverse consequences of the breaches of planning control. The County Council is of the view that the actions of the Airport have fallen considerably short of Government expectations.”

This is why we fight Luton Airport expansion, and this is why people join LADACAN. We ask everyone joining LADACAN to donate at least £10 to help with our costs – we’re all volunteers. To make an online donation you can use the button below: