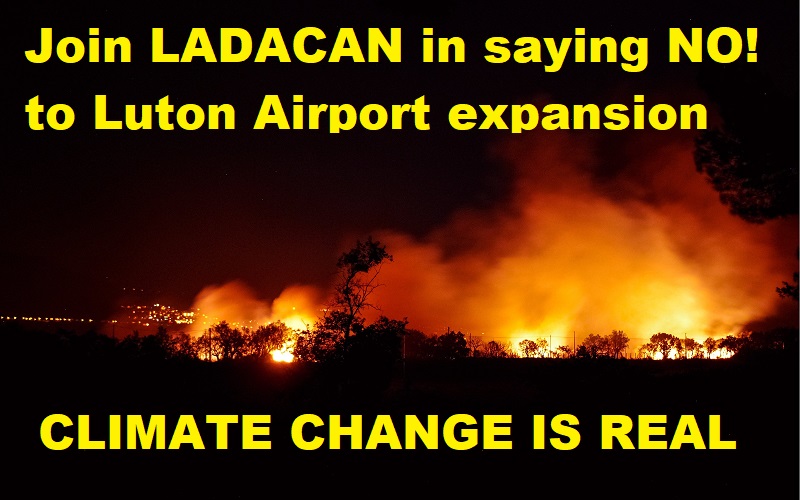 Luton Airport’s owner wants to almost double the airport’s capacity yet again, even though they have not completed the previous doubling project, due to take until 2028. Despite breaking noise limits in 2017-2019 by growing too fast, they now want 60% more flights over local towns and villages, 40,000 more passengers a day on crowded roads and trains, and to destroy Wigmore Park County Wildlife site to build a second terminal, aircraft stands and carparks.

The scale of the proposal is so huge it would have to be assessed as a Nationally Significant Infrastructure Project. Do we really want the equivalent of a Gatwick right on our doorsteps? The environmental impacts on the whole area would be enormous, leading to noise blight and likely house price reduction in the rural towns and villages over which the aircraft fly, as well as significantly increased carbon emissions and air pollution. They are proposing:

Please sign this petition to government to prevent further expansion of Luton Airport – the current permission to grow lasts until 2028: https://petition.parliament.uk/petitions/610459

If Luton Rising gets consent for this massive project, this rural area of north Hertfordshire and south Bedfordshire would be blighted forever by noise, choked roads, and more pollution and emissions. The airport already has permission to expand capacity – and in parallel time to reduce the noise. There is no need to grow further.

Luton Rising needs to apply for a Development Consent Order from the Planning Inspectorate to push this through. They have spent £60 million on consultants to create 12,000 pages of documents, slick marketing videos, one-sided exhibition boards, and a promotional website. Gallons of green-wash have been applied, along with misuse of the word “sustainable”. All this has cost public money which could have been used to alleviate poverty in Luton.

The downsides and the impacts of this plan are played right down on their website and exhibition panels, and hidden in the small print of thousands of pages of detailed information . We delved into the small print to give people a more balanced picture, which we have summarised on this website. We went through their consultation questions and provided powerful reasons why saying NO! would be the only environmentally responsible decision.

Luton Rising is trying to rush this through while the airport is still relatively quiet. Remember what it was like in 2019 – the noisiest, busiest-ever year, when Luton Airport broke its noise planning limits for the third year in a row. Do you want that and far worse? Would massive expansion of Luton Airport help solve the climate crisis or deal with Luton’s own Climate Emergency? The UN’s Intergovernmental Panel on Climate Change has said: the next 3 years are crucial in the battle to survive climate change. The Climate Change Committee has urged the government to rein in aviation expansion, but Luton Rising wants to do the exact opposite.

Do follow us on social media using the handle @GoLadacan

Click the link below to go to the next page to find out more about what they are proposing.