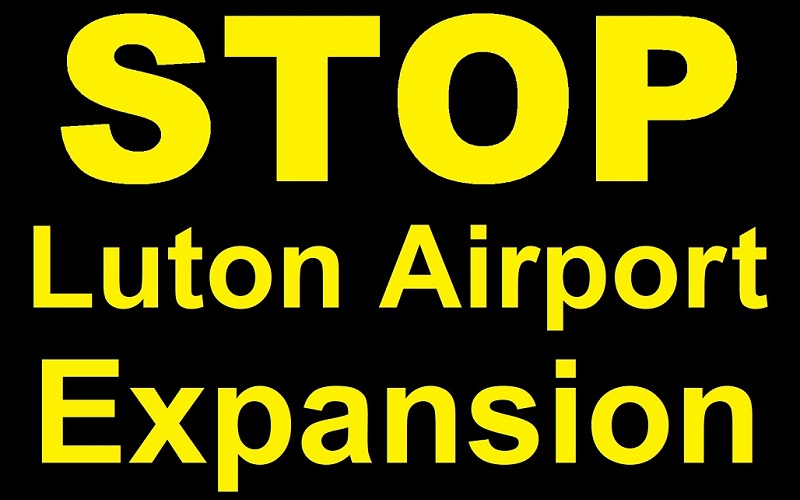 Luton Council has presided over an Airport operator which so mismanaged its release of passenger capacity that it breached its noise control conditions for three years in a row, and appeared powerless to do anything about it. Whether the breach due to over-rapid expansion had anything to do with the financial incentivisation of growth by Luton Borough Council and its Airport-owning company LLAL, we leave you to decide…

Either way, LLAL – which has spent a considerable amount of public money rebranding itself as “Luton Rising” – has now resumed its relentless push for yet more expansion of Luton Airport. Its latest plan is a massive increase from 18 million to 32 million passengers a year, involving paving over the nature reserve at Wigmore Park to build a second Terminal, causing many millions more vehicles to fill our already crowded country roads, and to increase yet again the noise which in 2019 became intolerable.

Is this the right thing to do when the Committee for Climate Change has made it clear that aviation expansion must be reigned in to hit net zero targets?

Local community groups and Councils are united in their opposition to further expansion at Luton Airport because it cause significant and unsustainable environmental damage through noise, emissions and pollution from aircraft and traffic, and overwhelm local road and rail services.

Yet because of its failure to diversify sources of income, Luton Borough Council is dependent on the Airport to an extent which, in the view of many people, makes it unable to see clearly. The Officers and Members who are driving the incessant Airport expansion do so in secret under the veil of secrecy afforded to a private company. Yet the money derived from the Airport operation is public money, and should be open to public scrutiny.

This questionable behaviour has led to ill-informed decision-making by the Council, according to Ernst & Young, the external auditors. Their 2018/19 report drew attention to the significant financial investment risk in the Airport developments, and the lack of any process by which Members of the Council could review the history of investment decisions when considering further expansion proposals.

Luton Airport is only half-way through a 15-year expansion project to double its capacity to 18 million passengers, and has failed to deliver the promised noise mitigations. The “justification” for further expansion is so they can make even more money, at the expense of quality of life in local communities. LLAL is led by Robin Porter, who is also the Chief Executive Officer of Luton Borough Council. Lord Evans’ report into standards in public life, Jan 2019, stresses the need to avoid conflicts of interest.

The proposed project is so massive that it would be a Nationally Significant Infrastructure Project decided by the National Planning Inspectorate (PINS) after submission of a formal Development Consent Order. Aviation-loving DfT Transport Secretary Grant Shapps hardly inspires confidence. We must head this DCO off at the pass.

The greenwashed DCO will (we are told) go to local consultation in 2022 and is likely to meet very strong opposition from local people, campaign groups including LADACAN, and other local authorities. Our main concerns are that it would be fundamentally unsustainable by:

The project was originally costed at some £2.4 billion, for which an external investor would be required. Luton Borough Council has already started work on a DART monorail between the Parkway station and the Airport, at huge cost and financial risk running to hundreds of millions of pounds. It is questionable whether this project – and that to build the New Century Park access road – should have been agreed, since they clearly facilitate the development of a proposed Terminal 2, which is part of a DCO that has not even been submitted yet and has certainly not been agreed.

Luton Council has now discovered it is virtually bankrupt due to the loss of revenue during the COVID-19 lockdown, and has taken its begging bowl to the government. The Luton Rising greenwashed website is full of spin about “sustainable”, “Green Managed Growth”, having learned from the previous consultation feedback how to dress its plans in sheep’s clothing.

LADACAN submitted a robust rebuttal to the pre-application DCO and will continue to lead the fight against further expansion at Luton Airport. See this page for the detail of our objection document: LADACAN objection to DCO

If you are concerned about quality of life in this local area, do consider joining LADACAN by donating at least £10 to help with our costs – we’re all volunteers. To make an online donation you can use the button below: