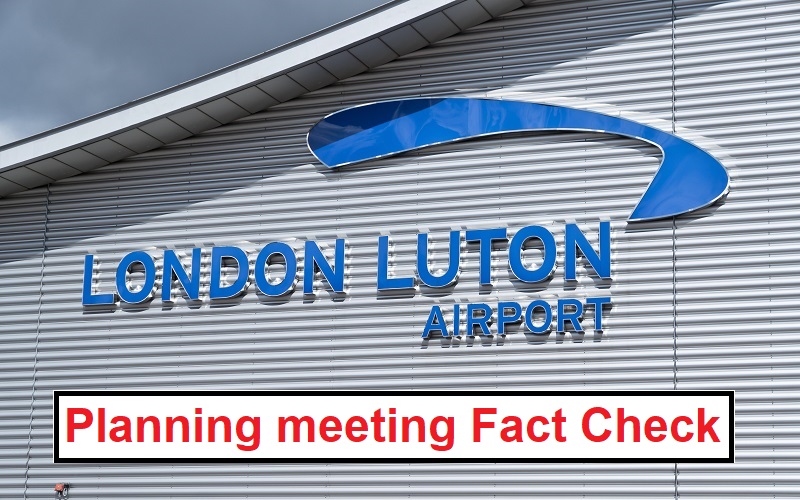 LADACAN has asked the Secretary of State, Michael Gove, to call-in this planning application. While considering it, he has issued an Article 31 Order preventing Luton Borough Council from ratifying the decision of its Development Control Committee to grant Luton Airport permission to legitimise the breach of its noise control conditions in 2017/18/19.

Hertfordshire County Council described the noise condition breach as “mismanagement”. The Airport operator admitted passenger growth needs to be managed more effectively. LADACAN highlighted financial incentivisation of over-rapid growth by the Council. And the Council has “no minutes” of meetings related to the breach (FoI response)…

LADACAN has run a Fact Check on the ‘expert evidence’ which influenced Luton Councillors to vote 7-2 for airport expansion at the development control meetings on 30 Nov and 1 Dec 2021. The meetings were recorded so you can play the media files and check for yourselves against the planning documents. Each statement carries the elapsed play-time at which it was made:

10:16 – the verbal report dismisses LADACAN’s challenge over noise contour accuracy by saying one contour related to accredited noise values, the other to corrected noise values. WRONG! Our objection was nothing to do with this. We found two identical contour outlines on the same maps, to which the Airport had attributed quite different areas in square kilometres. Since the area of a noise contour is a key noise measure, this is a major error and we asked for the contour data to be double-checked. They said no.

26:14 – the expert claimed that number of aircraft movements to achieve 19 million passengers is only 0.7% higher than in 2019. THIS IS MISLEADING! In 2019 the airport was flying too many aircraft anyway, in breach of its planning conditions, so this is not a valid comparison – as he went on to admit. Yet this error was not corrected in the meeting.

27:10 – the expert explained that a 43.5% increase in flights would only give rise to a change in noise level of +1.57dB. He said this was a minor change which would not normally be considered to give rise to significant impact. THIS IS MISLEADING! Increasing the number of flights by almost half as many again, when the noise of each flight ranges from about 60-80dB depending on where you live, is obviously not a minor change.

A noise expert should know that noise contours are based on a logarithmic average of instantaneous noise measurements, over a specified time. The Councillors were already confused by his technical jargon (“ATMs” to most people means cashpoint machines, not “Air Transport Movements”). So how are they supposed to know what a 1.57dB difference in a logarithmic average actually means in practice?

In this case, to dismiss a 43.5% increase in flights as “not significant” when it means an extra 120 or so flights per day is insulting to local communities under those flight paths. LADACAN deplores the aviation industry’s mis-use of noise terminology in this way.

38:47 – the expert confirmed that 2019 cannot be used for comparison of the noise effects of this application because it was a year when the Airport did not comply with its planning conditions. EXACTLY! That’s exactly what we said. In 2017, 2018 and 2019 the Airport operator undertook non-permitted development. It’s like a person being given permission to build one house and building two – they should not be allowed to get away with it. But the Environmental Impact Statement does not provide a clear comparison of the effect of this non-permitted development, either now or in the future.

43:37 – the expert said that the Environmental Statement does not present the noise case in a manner that is clearly understandable to all readers, and that the use of forecasts which do not seem to match reasonable short term expectations is ‘unhelpful’. EXACTLY! In that case why didn’t the Council’s Planning Officer insist on a clearer statement?

44:12 – the expert said that the application offers no remedy for the excess noise experienced by the community since 2017 and expected to continue for some years into the future. EXACTLY! The Airport operator has taken the financial benefits of aggressive growth which disregarded planning conditions, the community and its commitments. Why would the Council permit this??

44:36 – the expert claimed that extending the analysis beyond 2028 to show the noise reduces below original limits brings it in line with government policy using the excuse of a delay caused by COVID. MISLEADING! The reasonable alternative option of limiting the growth in flights to bring the limits under control by 2028 was not explored. No evidence has been given to demonstrate that COVID has delayed airline fleet modernisation.

13:40 – SILENCE! LADACAN had requested that legal advice be given to the development control meeting regarding whether financial incentivisation by Luton Borough Council of the airport operator to achieve “growth” and “super growth” was legal. We highlighted the apparent disregard for noise control conditions and the Council’s obligation to scrutinise performance against the noise control scheme. We pointed out that the incentive scheme might be found to be improper influence of the operation of the Airport in respect of Section 17 of the Airports Act 1986. And we noted that the scheme may be regarded as an improper subsidy under prevailing EU legislation. Yet no legal guidance was given in the planning meeting on these issues.

13:48 – the expert claimed that the contour mismatch LADACAN identified is a misunderstanding because there are no figures which relate to the 35.5sq km contour area, only tabulated data. WRONG! Page 3, Section 8 Noise, of the revised ES chapter 2 states “This updated chapter should be read in conjunction with the updated associated Appendices appended to this chapter (they continue to reference Volume 3 for consistency with the original chapter). The Figures within Volume 3: Figures and Appendices do not change.” Volume 3 clearly contains the Figures (ie charts) we referred to.

In the revised ES chapter 2, Appendix 8E, on page 8E5, is a table giving the area of the 48dB night noise contour for 19mppa in 2028 as 35.5sq km. But in Volume 3: Figures (still valid, as per the above statement) is a 19mppa contour plot for 48dB 2028 night in Figure 8.10, dated 2020, and its outline is the same as one in the previous screening report which quotes the area as being 29.9sq km. They can’t both be right! So somewhere along the line, the information which has been provided is wrong.

Based on the overwhelming public rejection of the Airport’s proposal to be allowed to legitimise making more noise than permitted between now and 2028, the heavy impact beyond the borders of Bedfordshire, the conflicted nature of the relationship between the Council and the Airport, and the controversial nature of this application, we and many others have asked the Department of Levelling Up, Housing and Communities to call this in and subject it to independent scrutiny.

Click below to find out why local people oppose this planning application:
https://ladacan.org/luton-airport-19-million-time-to-say-no/