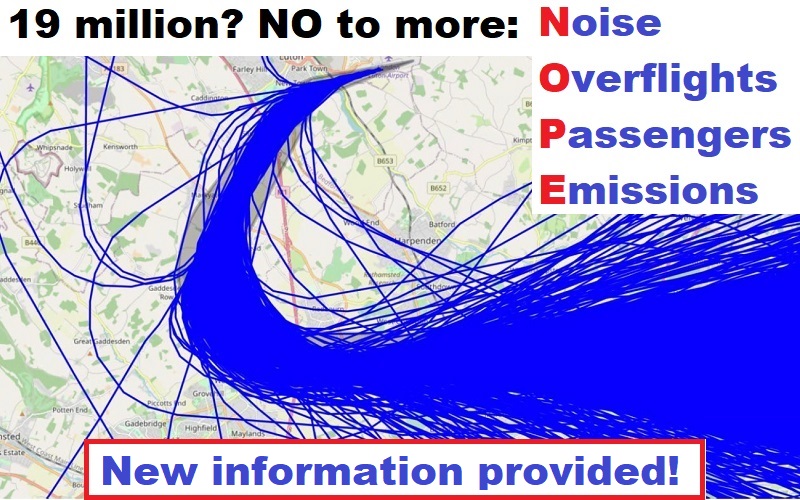 Further consultation comments are being invited on the Carbon Reduction Plan and revised Environmental Impact Assessment – more details in due course.

You can download the latest information from the Luton Borough Council planing portal here: Luton Planning Portal or by searching the portal for 21/00031/VARCON, and looking under the Documents tab.

Luton Airport deliberately grew twice as fast as its original commitment, reaching 18 million passengers in 2019 rather than 2028, well ahead of the less noisy aircraft needed to meet its promise to control the noise footprint.

Having completely ignored the noise impacts on residents, extra emissions from older, inefficient aircraft, and pollution from thousands of passengers still travelling in cars, it now wants permission to ignore its environmental responsibilities. The key thing missing from its planning application is the Carbon Reduction Plan.

The Airport is saying it must have this permission to safeguard jobs and its vital contribution to the local economy. Thanks to over-extending itself in the rush to develop the airport site, Luton Borough Council is now almost bankrupt, and the government has told it to reduce its dependence on the Airport.

Many people recall waves of aircraft starting before 06:00 and running on into the small hours of the night, with barely a couple of minutes between them at busy times. Others moved to the area when it was bearable, but the rapid increase in flights, noise and traffic congestion near the Airport really reduced their quality of life. People are frustrated and angry by the lack of control, feeling that the Airport chases commercial opportunity regardless of its promises to balance growth by measures which reduce noise.

Anyone concerned about quality of life around the Airport should object to this application. This is not just about “another million passengers”: the permission they seek would allow excess flights and emissions to continue. But most of all it would perpetuate the unhealthy reliance on just one cash-cow for the people of Luton.

Your comments need to be made on the Luton Council Planning Portal – details are provided at the end of this page!

We suggest preparing what you want to say ready to copy and paste it onto the portal in case it “times out” while you are writing. Why not start by describing how bad the noise and transport congestion became for you during the rapid growth of Luton Airport up to its busiest year in 2019? Then have a look at the questions below, which may help you prepare some comments in your own words:

Did the noise from the Airport in 2019 become excessive?
2019 was the Airport’s busiest year, in which it reached its passenger limit. Wizz Air in particular had introduced many more of the largest A321 planes yet the supposedly less noisy “neo” was proving to be just as loud at Luton.

Were you disturbed by aircraft noise from Luton during the day / at night?

Did you notice it getting much worse over the last 5 years – more / noisier?

Do you think the Council should enforce the noise controls, not relax them?

If so, we suggest objecting to this application due to the lack of control of noise, bearing in mind that the Council has a duty to protect residents.

Do you find night flights keep you awake or wake you up?
Luton Airport has increased night flights six-fold since 2013, up from 500 to 3,000. This planning application wants to go even further: the biggest noise increase it’s asking for is at night. The WHO links night noise to poor health.

Do Luton flights late at night or early in the morning disturb you?

Would it be wrong for the Airport to further increase its noise at night?

Do you think noise insulation is useless in hot weather or when outdoors?

If so, we suggest opposing this application because of the proposal to increase the night noise footprint and the links between noise at night and poor health, as well as the risks of accidents if people are tired.

Are you concerned about increasing carbon emissions from aviation?
The Committee for Climate Change has strongly recommended limiting growth in aviation in order to meet net zero by 2050. Luton Airport has so far only managed to reduce its emissions by 0.9%, and cannot directly control carbon emissions from passenger journeys or aircraft.

Do you think the Airport should reduce emissions by reducing flight numbers?

Should the Airport bring in greener planes and redesign airspace to remove inefficiencies before expanding any further?

Should the Airport prove it can reduce emissions from aircraft and passenger travel before applying to increase capacity?

If so, we suggest you object to this application on the grounds that it is unsustainable and not in line with achieving net zero by 2050 or Luton’s own declaration of a Climate Emergency.

Did you find local roads more congested during 2019 than ever?

Did you notice rail services becoming ever more crowded?

Is it bad that passengers’ cars account for 50% of causes of emissions?

If so, we suggest you object to the this application because the Airport has has not yet dealt with the significant emissions burden from cars used by passengers to travel to and from the airport by achieving a switch to public transport.

Are you happy with the promises of economic benefit and jobs?
When Luton Airport applied in 2013 to expand to 18 million passengers it told everyone that there would be economic benefit and lots of new jobs. These benefits have not changed, and post-COVID it will be able to recover. No reasons has been given for wanting to move ahead of that level.

Do you think the original promises of economic benefit were sufficient?

Do you want the Council now to focus on finding a wider range of jobs?

Are you concerned the Council has invested far too much in the Airport?

If so, we suggest you object to this application and propose that the Council should invest in diversifying the local economy, rather than pouring yet more money into supporting the Spanish-owned airport operator.

Do you think Luton Airport should keep its promises?
Luton Airport signed legal agreements with the Council in 2015 agreeing to manage its growth in line with noise reductions. Yet it has mismanaged the growth by allowing too many flights too soon, in order to make more money for its shareholders. Now it’s asking for the mismanagement to be legalised.

Do you think Luton Airport should stick to its legal agreements?

Do you think the Council should stand up for its residents?

Do you think planning conditions are there for a reason?

If so, we recommend you object to this application using those as reasons why the Council should refuse permission for the Airport to ignore its planning conditions, and instead make it stick to its original agreements.

Should Luton Council uphold its own Local Plan ?
Luton Borough Council has a Local Plan which includes provisions which protect people from environmental impacts such as noise and pollution. Its own Environmental Protection department is opposed to this application, because the additional noise would undo careful work to bring noise down.

Do you think the protection provided by Luton’s Local Plan is important?

Do you think the Airport Operator should respect the Local Plan?

Should the Council should back its own Environmental Protection team?

If so, we recommend you object to this application on grounds that the environmental harms would outweigh commercial benefit, particularly because 18 million passengers gives sufficient economic benefit in any case.

Do you think Luton Airport should be honest with people?
In its planning application, the Airport tries to rewrite history, claiming its 2013 permission was to grow to 18 million passengers by 2020 (untrue – it said 2028); the Airport operates within strict noise parameters (untrue – it deliberately broke its noise limits). It does however admit its Business and Operations teams should have communicated better over growth rate.

Should the biggest noise polluter locally be truthful in consultation?

Should this “good neighbour Airport” operate within its limits?

Should the Airport’s managers prove they are trustworthy first?

If so, we suggest you oppose this planning application on grounds that the Airport has not been operated in a satisfactory manner, and the Council needs to sort that out before permitting any further growth.

How to submit your comments:

Your comments on this planning application need to be submitted on the Luton Council Planning Portal. Here’s how to do it in 3 easy steps:

2) Prepare your comments in your own words based on the above
LUTON’S PLANNING PORTAL TIMES OUT AFTER 15-20 min so we really recommend getting your comments ready in NotePad or Word so you can copy/paste them in.

Click the Comment button, and select Commenter Type “Neighbour letter” (in which case your name and address will be displayed) or “Request to be made sensitive” to hide them. In Stance select “Object” and choose what bothers you – either “Noise and disturbance” or “Other” which might be traffic congestion or emissions:

Then paste in your comments and submit them.

If all else fails, you can email your objection along with your name, address and postcode, quoting reference 21/00031/VARCON, to: developmentcontrol@luton.gov.uk

REMEMBER: you can add a comment to this webpage, but you also need to submit your objection to Luton Borough Council on the planning portal or email it to them otherwise it won’t count!

If you have found this information useful, please join LADACAN to be kept up to date with latest developments – see our Join Us page.