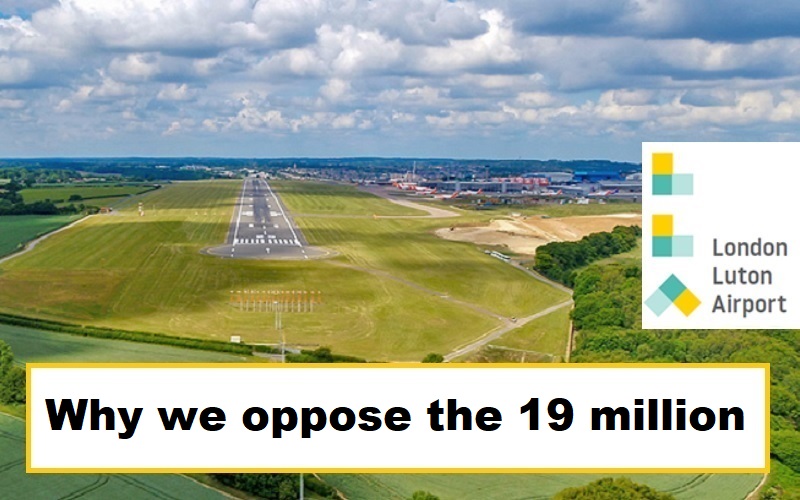 Luton Airport applied in 2021 to increase its noise footprint and permitted numbers of passengers. It seeks this permission in order to legitimise its three-year breach of noise planning conditions, which started in 2017 and was only halted by the pandemic. The steadily worsening breaches were caused by over-rapid growth before sufficient less noisy aircraft had been introduced.

Luton Airport’s owner, Luton Borough Council, benefits financially from the Airport and along with its airport company Luton Rising incentivised the Airport operator to sign up “growth” and “super growth” airlines. The capacity grew twice as fast as the Airport operator’s original commitment, resulting in non-permitted noise impacts on residents, extra emissions from as-yet unmodernised aircraft, and excess emissions from thousands of passengers still travelling in cars.

Nevertheless Luton Borough Council agreed in December 2021 to relax the planning conditions designed to protect residents and the local environment, justifying this decision on economic grounds. It overlooked the fact that the 2013 expansion plan to reach 18 million passengers was confident of delivering sufficient economic benefit and jobs in and around Luton until 2028.

People concerned about quality of life around the Airport overwhelmingly objected to this application. This is not just about “another million passengers”: the permission they seek would allow excess flights and emissions to continue.

Many people recall waves of aircraft starting before 06:00 and running on into the small hours of the night, with barely a couple of minutes between them at busy times. Others moved to the area when it was bearable, but the rapid increase in flights, noise and traffic congestion near the Airport really reduced their quality of life. People are frustrated and angry by the lack of control, feeling that the Airport chases commercial opportunity regardless of its promises to balance growth by measures which reduce noise.

The additional environmental impact is against planning policy
Luton’s Local Plan policy LLP6 states that the Airport should achieve noise reduction, or no material increase. This application would cause significant noise increase for 1,877 homes. LLP6 requires appropriate mitigation. The application offers noise insulation which does not work if people need to have windows open at night.

LLP6 requires effective noise control, but the Airport has been operated in breach of its noise controls for three years. LLP6 also requires significant diminution over time of the effects of airport operations on the amenity of local residents. This application would increase those effects for years to come and never achieve the noise footprint reduction originally agreed to.

This application should be rejected because it does not conform to the Local Plan LLP6.

Aircraft noise at night is harmful to health
Many research studies have concluded that aircraft noise at night is directly harmful to health. The largest increase sought by this application is to the permitted “noise footprint” at night, up by 5.7sqkm compared to 2.2sqkm by day. There has already been a 6-fold increase in night flights, up from 500 to 3,000 between 2013 and 2019.

In 2019, when the Airport reached its 18 million passenger capacity limit, early morning flights started before 06:00, waking people up. Arrivals went on into the late evening and the small hours of the night, disturbing sleep. Cargo flights during the night also wake people up. All this increases stress, leading to high blood pressure, strokes and heart attacks. The chances of accidents on the road or at work are also increased if people are tired.

This application should be rejected because it would harm public health.

The Carbon Reduction Plan omits aircraft emissions
Carbon emissions are a critical issue because of climate change. Luton Borough Council is committed to becoming carbon neutral by 2050. Most people travel to the Airport by cars and taxis because public transport links are limited. Adding further to surface transport emissions, and to aircraft emissions which count towards the national carbon budget, is against the advice of the Climate Change Committee and the UN IPCC.

This application should be rejected because it is unsustainable in climate change terms.

The need for the application has not been justified
Luton Airport is only half way through the 15-year growth plan it agreed to in 2013, which included legal agreement to noise control conditions which required growth and economic benefit to be balanced by mitigation.

By 2019 there were supposed to be just 12.9 million passengers: in fact there were 18 million, the number projected for 2028. COVID-19 reduced passenger numbers to around 6 million in 2020 and it will take some years to recover. Going forward there should be a properly controlled and noise-mitigated operation within its planning controls.

The Airport operator has already promised but not yet delivered environmental impact mitigations such as more of the less noisy aircraft, more passengers using public transport, and continuous climb for all departures

The application should be refused because it exceeds what is permitted or necessary.

The Council did not provide governance arrangements to ensure separation of roles: the Board of LLAL comprises Council Members, and Robin Porter was simultaneously the Chief Executive of the Council and Chief Operating Officer of LLAL.

Members of the Council who sit on the Board of LLAL are prohibited from publicly criticising any of its decisions, yet LLAL oversees the spending of tens of millions of pounds of public money without any public scrutiny or accountability.

This application should be rejected because it arises from a failure of scrutiny and proper enforcement by a conflicted Local Planning Authority.

The application is not sustainable
Over-rapid capacity expansion has led to additional disturbance, noise, air pollution and carbon emissions before balancing mitigations were in place.

The airport has not yet introduced the necessary proportion of aircraft with modern, more fuel-efficient and less noisy engines to operate at 18 million passengers within its agreed noise footprint, let alone 19 million.

The carbon impact of this imbalance has been exacerbated by a failure to deliver airspace redesign so aircraft can climb continuously. Departures are often held low for up to 15-20 miles causes additional noise, emissions and low-level air pollution.

The modal shift of passengers from cars and taxis to public transport has not yet occurred sufficiently to have an impact on the 97% of its emissions over which the Airport has no direct control.

Economic benefits can be delivered without this capacity expansion
Airport growth can create jobs and local economic benefit, and the scale of those benefits were described and agreed when planning permission was granted in 2013 for a 15-year steady expansion to 18 million passengers.

The windfall additional revenues caused by the recent double-rate growth should be invested in diversification, given the economic impact of COVID-19 and the risk to prosperity in Luton by over-reliance on the Airport.

Luton’s economic future would be more sustainable if it diversified rather than pouring yet more money into an Airport which is not well sited, has poor east-west transport links, and has failed to show that it can be relied on to deliver environmentally balanced sustainable growth.

The economic benefits of growth to 18 million passengers were agreed as sufficient in 2013, and the Council should refocus on achieving that in a way which is economically resilient and environmentally sustainable.

This application should be rejected because it does not evidence why an 18 million passenger capacity is insufficient for economic benefit.

The Council failed adequately to scrutinise the Airport
The Section 106 legal agreement requires the Airport to pay the Council £15,000 each year for the Director of Planning to monitor its performance against the Noise Control Scheme. The Council failed to do this adequately and did not step in quickly enough to prevent noise limits being breached.

By 2019, over-rapid growth brought the Airport up against its passenger throughput limit as well. Despite its attempts to regain control, it failed to do so – in fact only the COVID restrictions have brought the operation back inside its legally agreed limits on noise and passengers numbers.

This application should be refused, because to permit it would bring local planning control into disrepute.

The application is premature and ill-founded
The application includes a Master Plan for the Airport, which has not been separately reviewed by external stakeholders or consulted on. The evidence used to underpin its proposals, including whether mitigations are adequate, has not been shared.

A Master Plan should dovetail with a Noise Action Plan. Luton Airport’s 2019 Noise Action Plan contains incorrect statements that the Airport will be operated within its noise contours, made at a time when it had already breached them.

It is unclear when demand for air travel will return to pre-COVID levels, and the forecasts quoted in the application are already out of date. Without accurately based forecasts, there can be no certainty attached to outcomes.

The application should be rejected on grounds that it is premature and ill-founded, and its forecasts cannot be relied on with any confidence.

If you have found this information useful, please join LADACAN to be kept up to date with latest developments – see our Join Us page.

Please consider making a donation towards our running costs – we’re all volunteers. Those not yet members of LADACAN who donate £10 or more will be added to our emailing list so we can keep you up-to-date with this and other matters relating to Luton Airport environmental impacts.